Today's post is part of the Absolute Write June Blog Chain.  This month's prompt is about weird worlds.  Take a look at my piece of fiction below, and then take a tour of my fellow AWer's blogs to see their awesome work.

~
Luc punched the seat in front of him and cursed.  “Where’d you learn to drive?”

Daemon, the driver, was still reeling from the collision with the golden sign and took a moment before speaking.  “The glare blinded me, boss.”
Both climbed out of the vehicle and glanced around.  Luc didn’t recognize the lush valley.  The stillness was eerie and so unusual, so weird, but with a tint of familiarity that he couldn’t explain.  “Do you at least know where we are?” he asked while rubbing his sleeve as if the sunlight would soil his suit.
A brief hesitation was met with a slap to the back of Daemon’s head.  “Sure, boss, sure.”  Working a kink out of his neck, Daemon added, “It’s just over that rise there.  It’s got to be.”
Luc wasn’t about to go traipsing through thick, green grass.  There was no telling what kind of filthy creatures could be lurking there.  And the sunlight was already forcing his temples to pound.  “Then get to it! I’ll be waiting.”  He took his place in the back seat and closed his eyes.  His nap had been interrupted, and he was hoping for a few more minutes of rest.
Knowing better than to disobey, Daemon trudged along the frightening landscape.  He’d never seen such bright colors.  Green grass went on for miles and tickled his feet.  The clear blue sky held no clouds.  And the sun.  It burned his skin, but not like the piercing burns he was used to.  Hoping he hadn’t botched the job too bad, he made his way over the rise and shielded his eyes with his hand.  Then he screamed.
Seconds later, Luc was jerked awake by a tug on his arm.  “What now?” He set his piercing eyes on his driver who was now kneeling on the ground and gnashing his teeth.
His body trembling, Daemon pleaded for mercy.  “I’m sorry, boss.  I didn’t mean to bring us here.”
Luc jumped out of the vehicle.  The sound of a heavily clad army filled the air.  A trumpet sounded.  He ran to the front of the car for a better view of the sign that had fallen to the ground.  The glare remained, but he was still able to read the bold letters.  HEAVEN.  Luc’s eyes widened until they were ready to pop out their sockets.  Turning and pointing his gnarled finger at Daemon, he yelled, “You damned fool! Get us back to Hell!”
~

Hope you enjoyed.  Now check out the following: 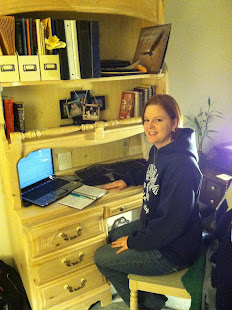